My appologies to the London folks who have never been taken out to a send off, or a few drinks anyway. Especially those I promised. My degree of organisation was very limited the days before I headed off, and albeit planned it never happened. There will certainly be other occasions however not necessarily soon…

My plan was to head off on Sunday, September 11th. With all my planning, organising, and running around in circles I had completely forgotten about my passport. The gentle remainder came on Friday, as the embassy called to inform me it was ready to collect. I was anxious to get started but what does a delay of one day matter? Only on Saturday it dawned on me that something big was about to happen. And with that the thought of staying another night in the safe confines of my temporary home in Stratford upon Avon was comforting.

I left Stratford on Sunday afternoon on the train and stayed the night in London. Just before eight on Monday I arrived at the embassy on my loaded bike only to learn it opens at nine. Well, English opening times and Austrian closing times, I thought. I left again for a coffee and when I came back a group of women had gathered whose passports had been stolen and who were now unable to leave the country. Well, it took only an hour until forms were filled out and fingerprints taken. By ten I grabbed my shiny new passport and off I went. 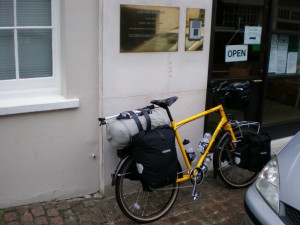 I cycled up to Hyde Park corner, and towards Buckingham Palace, then down the Mall. I only passed my chosen start line, Trafalgar Square, and turned into the Strand. Through the City, I rather coincidentally passed my old work, then St. Paul’s Cathedral, the Monument and the Tower. I crossed the Thames at Tower Bridge, then turned onto Boris superhighway towards Greenwich. It was a truly superb ride, and the celebration of my departure.

I had a break on the upper end of Greenwich Park, right where the London Marathon starts. I dropped a few clothes there and for the first time in the real world I changed into my new cycle shoes. I practiced to engage and disengage the connectors a few more times and when I felt safe, I went back on, for a few meters, before I had to perform a sudden stop, and made my first uncontrolled acquaintance with the ground. Becoming familiar with the connectors took the whole day, and four more times falling over. I got there eventually…

The ride through Kent was beautiful through a hilly, green scenery. I made good progress. It was an exhausting progress however, given the hills. Why had nobody told me before?

Astorm warning was out so I checked for the ferries across the Channel. They were running heavy delays. For this reason, and given the unexpected exhaustion from that hilly ride, I took a train from Canterbury to Dover.

The eight o’clock ferry boarded round about eleven. The bike queue was just me in shorts shivering and a Czech man on a scooter who had come all the way without luggage to see some family. I had chosen Dunkerque as the destination because this would save me around 30 km of cycling over Calais. The crossing itself is such a straightforward and organised prosess, there was nothing romantic about it.

The ferry spat me out in the middle of nowhere, and some locals had told me it would be at least an hour to town. Getting back on the bike at two in the morning didn’t exactly excite me. I headed off into the night. There was no traffic whatsoever, it was warm and clear, and I had a strong tailwind. I had a surprisingly pleasant ride under the stars. I found my bed at about three in the morning.

The start on Tuesday was late in the morning. Not long after crossing the border to Belgium I hit the coast. For the most part it is built up and feels like a very long city, even with a tram running all the way. I stuck to the beach for most of the way. It was another sunny enough day and with a strong tailwind I raced along, the beach to my left, clouds of sand blowing along the way. I turned inland in Oostende and the rest of the way towards Brugge was through the never ending fields.

Brugge is an old, charming town. The historic centre is bigand very well preserved. Most houses are either half timber or beautifully decorated. There is an extensive network of tree lined canals, with bridges crossing them. It is a truly beautiful place. Albeit anxious to keep going I decided to spend the morning in town, to take a few photos at least. 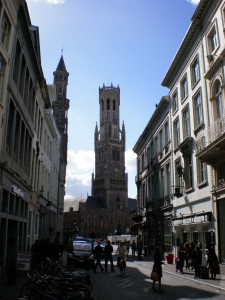 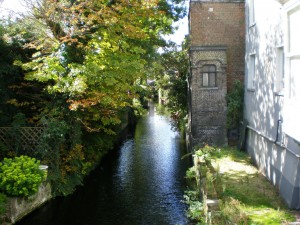 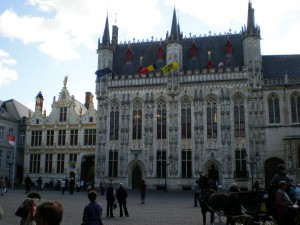 The scenery for the rest of the week was never ending fields on perfectly flat ground, with the occasional swamp, and canals cutting through. Easy to cycle but rather dull for the views. 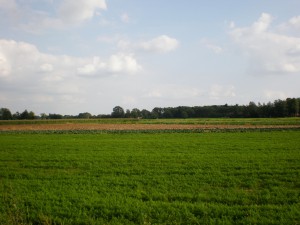 Antwerpen was another beautiful overnight stop, and worth spending a few hours. 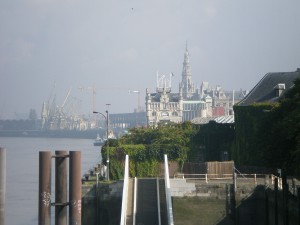 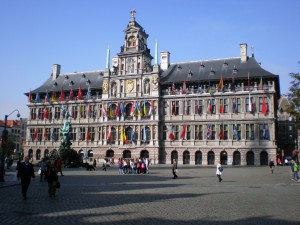 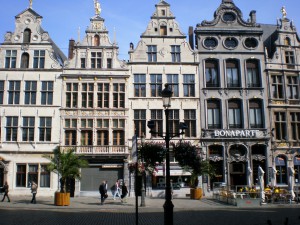 Belgium was a very nice experience. There is a nice beach, incredibly beautiful towns and cities, the food and the beer is good and there are always good cycle paths. Plenty of cyclists were around, and when asked always helped with directions, or filling up water bottles.

I didn’t mind finding Eindhoven a rather functional city where I had no desire to stay longer than for the night. For the first time though I took the beautiful rather than the short way on Friday. 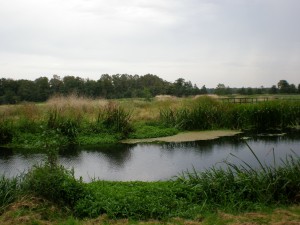 Exhausted fromfive days of about 120 km cycling I stopped for the nightat a small country town just after crossing into Germany.

I hit the Rhine in Krefeld on Saturday morning. Later in the day I crossed it into Duisburg where I considered the first leg finished. 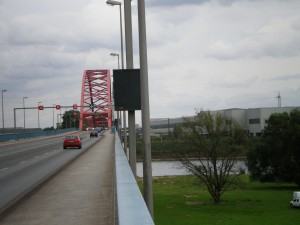