Tuesday was a public holiday and Bozen remained closed. I had time for a coffee in the morning sun under the statue of Walther von der Vogelweide, and took a few more photos. On the way out I passed the Victory Monument. This is one of the few remaining fascist monuments. It was erected on the personal order of Benito Mussolini and inaugurated in 1928, dedicated to the ‘martyrs of the war’. On its front side a goddess of victory throws an arrow towards the (germanic) north. To this day this structure is a focal point of tension between the Italian and German speaking communities, the latter regard it as a provocation and nickname it the ‘Fascist Temple’, for its design and for who built it. It is heavily fenced and video surveyed. In 2008 a protest march against fascist relicts was on the verge of turning violent as the protesters ran into a group of neo fascists and only a heavy police presence could keep them apart. The latin script ‘Hic patriae finis siste signa / hinc ceteros excolvimus lingua legibus artibus’ on the facade however must have been a joke at the time. It translates to ‘Here at the border of the fatherland set down the banner. From this point on we educated the others with language law and culture’. Around the time of the First World War, illiteracy rate was about 5 % in Austria, and almost 60 % in Italy.

I headed off and followed further down the Etsch/Adige towards Rovereto. It was a sunny day and the cycle path was crowded, mainly with Italians as it seemed. This proved to be a friendly bunch, most people greeted with a ‘Salve’, ‘Ciao’, or when they caught me during a meal a ‘Buon Appetito’.

The cycle path remained excellent. First it followed a former railway track with a number of tunnels, then along the river, for the most part, and sometimes through the seemingly never ending vineyards and apple plantations. After seeing so many apple trees I stopped at a roadside stall to buy a bottle of apple juice to accompany my lunch. It turned into a sociable break there. People told me the cycle path would continue all the way to Verona. Such a good road without any combustion powered traffic for such a long way? Hard to believe…

I only passed the provincial capital Trento and rolled into Rovereto at the last light of the day. It is an old charming town with a big fortress. For much of its history this used to be a heavily militarised outpost. It was the border of Habsburg’s Austria until the end of the First World War. And even then the town had never surrendered.

Only a few kilometres further down the river the cycle path ended abruptly into a meager dirt track. At the same spot a signpost indicated that this was where Trentin-Sdtirol/Trentino-Alto Adige region borders Veneto region. How ridiculous is this? Well, cycling for four days on a shiny new cycle path would have been too good to be true. I followed the road for some time until I hit a cycle path once more. Apparently it wasn’t nonexistent, just patchy.

My goal for the day had been Verona however I changed plans on the way and headed for Peschiera del Garda. It seemed stupid to make the detour, and back, and saving a night in Verona would probably buy me two there. Unfortunately, this was when the weather changed and it was not meant I could enjoy the beauties of Lake Garda for more than an hour before sunset. Over night a heavy fog formed which was replaced by heavy low clouds the next morning.

On Thursday I had a day trip to Verona on the train. I found it a beautiful city, not to be missed. It was the first time I encountered some other bike tourists. Shame I hadn’t been there on the bike too.

Leaving Peschiera I had the chance to test my waterproofs for the first time. I headed off in the rain on Friday, with no clear target in mind. The rain stopped in the afternoon. Thanks to the strong easterly wind I chose to continue westwards and ended up in a Cremona. With great confidence in my reflectors I rolled into the city well after dark. There is a very impressive cathedral in this city. Not sure whether it would be worth a trip, but certainly a detour.

I had figured out that there was a cycle path along the Po and I headed off, upstream. It was pouring with rain. This time it was not the question whether I would get wet, just how wet would I get. How waterproof is waterproof? I wasn’t particularly keen to go, but I had predicted myself a nice tailwind and that lifted my spirits to the point that made the departure possible. The path is not really along the river, in fact I only saw it three times, two of which were crossings. It is rather a zig zag course around the area. After about 60 km I gave up and headed for Piacenza, a city which is only 25 km from Cremona if you follow the main road. Dang! In the centre some man sized plastic snails greeted me, spot on, I thought, a symbol of my achievements today. 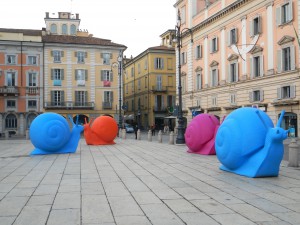 Despite my waterproof camera there are no photos of this day. I was too worried to open my handlebar bag to grab it in the pouring rain. The landscape wasn’t particularly exciting either. The Pedan Plain is a perfectly flat and heavily farmed place.

So far, I am happy to report that my pannier bags have kept their contents dry, and so did the rain trousers. The upper half of me, as well as my feet got wet eventually, though it was not too bad. And then, I am not sure whether this is more a statement about my gear, or about how much of a beginner I actually am…

When I crossed the Po into Piacenza yesterday it carried a worrying amount of debris. I have no idea how it looks like when it is ‘normal’ but I think the water is a bit closer than usual. Parts of the road that I used coming to town are closed for traffic now. I learned that further upstream Torino was on the edge of flooding. I am only 130 km away from Genoa, two days cycling since some altitude is involved crossing the Apennines, and the daylight is short. Due to the recent floods there I am still not sure whether the city is fully functional, and in particular whether the harbour is operational. However chances are I will stay here in Piacenza for another day if the weather doesn’t improve. There is probably no need to hurry right now. I might splash out on a nice hotel though. 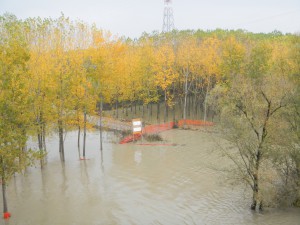