Breakdowns: Two punctures, both on the back wheel.

Items lost: Virtually nothing. One pair of sunglasses fell into the gap between the train and the platform when I got on the train in Beuron.

London to Dover: Google Maps on my mobile phone. No cost for data roaming there. There was not a lot of need though, it’s well signposted.

Dunkerque to Duisburg: ADAC Lnderkarte Belgien / Luxemburg. Covers the whole distance from just outside Dunkerque to the Ruhrgebiet.

Essen to Freiburg: None. The Rhine isn’t that hard to miss and the signposting is generally good. Got lost south of Strasbourg though, so might consider one next time.

Freiburg to Beuron: Breisgau-Kaiserstuhl and Schwarzwald-Baar by Landesamt fr Geoinformation and Landentwicklung Baden-Wrttemberg. The 1:35000 scale is really useless for cycling. Doesn’t leave a lot of time for pedalling with the constant turning.

Velden am Wrthersee to Bozen: Marco Polo Nr. 42 Krnten and Nr. 43 Sdtirol/Dolomiten. Their 1:120000 scale is a little large for cycling, needs frequent turning. There is a about a 50 km gap between the two.

The Netherlands. There is a dense network of dedicated cycle paths everywhere, always free of cars. And it’s perfectly flat. It is essential to understand the system of numbered intersections however to find your way around.

Best for sharing roads with cars:

England. By a long way. Drivers are a lot more patient than anywhere else.

Of course my mum’s cooking back in Salzburg. In terms of commercially prepared meals Italy equal with Belgium. The latter being my slight favourite because of the fantastic beer to accompany it.

Italy. There is a bar in even the smallest of towns serving coffee that’s always fresh and strong for 1 Euro.

Germany. It was sometimes old fashioned but always clean and well maintained. And for European standards it remains a very reasonably prised destination.

No unfriendly place so far, on a scale from one to five it’s a one for every country. The one plus I am (somewhat proudly) awarding to… Austria. Virtually all fellow cyclists greeted when we passed each other, others being a very rare exception. 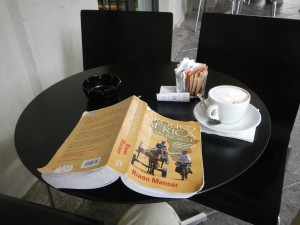