After being waved through by Guardia di Finanza and had my details taken by Polizia di Frontiera I was let forward to the pier. The boarding process was in full steam. There were three bridges and a veritable traffic jam in front of them originating from two queues and some port machinery pulling in other cargo from the side. Most of the cars and vans looked so overloaded I wondered why the authorities never came across the idea of setting up scales and earn a pot of money in fines. In the middle of it was a guy with a few stripes on his shoulders and a clipboard shouting at his underlings who in turn shouted at the drivers who more often than not shouted back. Evidently a few Mediterranean tempers were clashing here. Eventually I was shouted at too, directed to the foot passenger entrance, from there back to the garage, where my bike was stripped into a niche. I was allocated a bed and then I continued watching what I can only describe as a mess from the outside deck. How different, how much more organised and quieter had that same process been back in Dover. I couldn’t pretend however that this piece of Mediterranean organisation was any inferior. Precisely on scheduled departure time the bridges were pulled, the mighty engine roared up and off we went. I stood outside in the sun for some time watching Genoa disappear on the horizon. 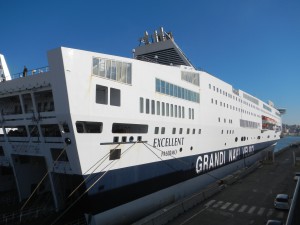 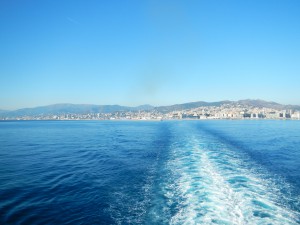 The sailing takes just under 48 hours. And it was boring. I had a cabin with three bunk beds and a window all by myself what would have been nice except that it was freezing cold in there. Otherwise, I found the pool dry, the gym turned into a mosque, the casino closed, the disco too, until on the second day Moroccan immigration set up their office there. That shipping company certainly overpromise in their shiny brochures.

On Friday I woke up with a beautiful sunrise however, quickly being reminded how boring it would be trapped on this ship I went back to sleep. When I finally got up it was moored in the port of Barcelona. I learned from other passengers that the port workers were on strike and the departure would be delayed until 17.00 hours, a hefty 7 hours delay was brewing.

More boring. It was raining outside so I went back into my fridge reading and playing computer games. After departure while filling out immigration forms I met a fellow Austrian who was on his way to holidays. He doesn’t like flying so he was driving to Agadir. He had a bottle of nice whiskey and we spent the evening just getting utterly drunk.

There had been a reason why I had chosen that particular ferry crossing. It was the only one that would arrive in the morning. Contrary to the trip across the Channel I had done my homework this time. It would drop me off at the new port called Tanger Med, which is about 50 km outside of Tangier. This way I would have more than enough daytime left to cycle to town. However now, rather than 11.00 hours the arrival in Tangier was predicted for 16.00 hours. Once more I had pre booked a place to stay, thinking that this would facilitate my arrival.

The increasing number of ships around and especially the widely visible rock of Gibraltar were sure signs the arrival was close. Once more I got a bit worried, about what would lie ahead, and the general thoughts about whether what I am doing is right or wrong. 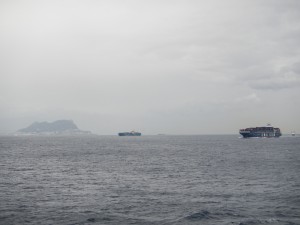 Those worries were gone instantly as I stepped outside. Rather than some hazy hypothetical problems that might or might much more likely not emerge, the reality presented itself with pouring rain and a rather firm headwind, and worst of all probably without a lot more daylight.

It was already quite dark when a sign indicated 30 km to Tangier. I grabbed my headtorch only to find that the batteries were empty. With nothing but rocks and the ocean in sight, all I could do for the moment was keep going. And it got night, and by that I mean pitch black. In my black raincoat and without any sort of lights I felt more than unsafe. I stopped at the next shop which fortunately wasn’t that far hoping that they could phone me a taxi and I would come back tomorrow and pick up the bike.

This wasn’t necessary. I made a very slow attempt at telling my story using about 10 of the 20 French words I know. A guy named Omar, as I learned later offered me a lift to Tangier in his van, that was apparently used to deliver eggs, complete with my bike. I was relieved. The chatter on the way was equally slow. It was nice nevertheless. When he delivered me right in front of the place I had booked, I really wanted to pay him in a way or another or give him any sort of present, but he refused.

Now I was here, in a different world, which at first glance didn’t look all that different, and quite stressed out getting there. Was that all bad luck I had? That’s what I kept thinking all the way, but in hindsight, would rather call it stupid. There were places to stay in these little towns between the port and Tangier. Why had I pre booked a hotel in the first place? Already in the past that had done me no good, lead to shortcuts, uncertain arrivals, the need to make pricey phone calls or even saw me paying more than what similar places would have charged locally. Second, why was I a slave to that booking? My travel insurance covers delays. And third, why did I not buy emergency battery powered lights for the bike? I had them in my hands in shops back in London, several times in Holland, Germany and Austria, and even twice three days earlier in Genoa, not to mention spare batteries for the headtorch. Risking to end up as a piece of roadkill on my first 30 km in Africa only for doing something stupid like not carrying spare batteries… Talk stupid!

I did not find Tangier a particularly beautiful place. It has a nice waterfront though, and the views across the Straight of Gibraltar are great. There are tourists here most of whom seem to be day trippers from Spain. Apparently the government is seeking to increase tourism and there is construction work in progress all over the place. I learned the basics of navigating Moroccan cities however. There seems to be always an old walled part called the ‘Medina’ which tends to be a proper maze and a new town which is a lot easier to navigate. My guidebook has a substantial section about all the hassle from touts there. For whatever reason, none of this happened to me but unfortunately for the first few hours it had changed my attitude. 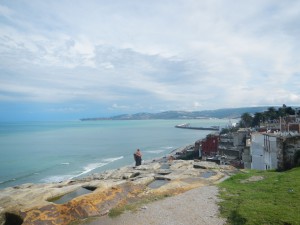 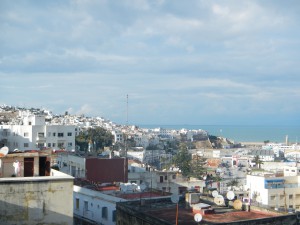 I left Tangiers on Monday. I saw Omar in his eggs van once more at an intersection on the edge of town. We waved at each other, and I hoped he would stop for a moment but unfortunately he didn’t. I was headed for the Rif mountains. The area I went through was moderately beautiful first, just densely populated with little order. The last bit, and then especially the ride today was very scenic albeit steep. I heard the horns a lot, which was almost exclusively friendly as I noticed. I got a lot of waves and thumbs up from many drivers, as well as pedestrians and naturally all of the few cyclists. 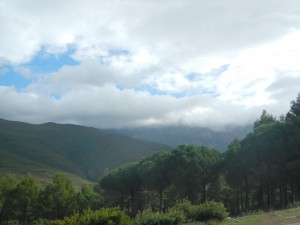 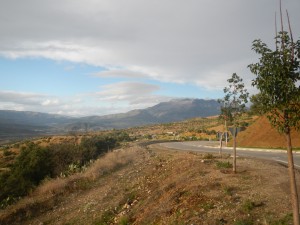 The cycling itself has not been great so far. In this area the only real choice are the main roads or what I found the ‘red’ roads on the Michelin map, and they are predictably busy. Nevertheless some can be quite skinny for extended distances and with some of these kamikaze drivers it is not always nice. So far any smaller roads would have been a major detour. From now on I have more ‘yellow’ and ‘white’ roads as suitable alternatives, so I expect an improvement there. I am headed for Fez.

Before I left this morning I was thinking about going farther than the just over 60 km, but now that I am sitting in Chefchaouen typing these lines I am actually quite proud of my achievements today. There must be an extended downhill ride ahead in the next few days. I am quite keen to cover greater daily distances in the near future though. 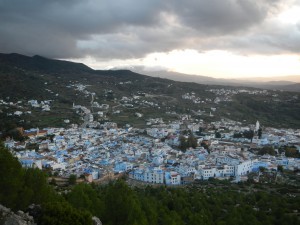