I wanted to post this earlier since for a few days I had all the idle time I could ever wish for as well as an excellent internet connection. However on my trip to Rabat I forgot to bring that cable to connect the camera, so it would have been without photos, and I decided it would have to wait.

I did not stay in Chefchauen for more than a night. Perhaps I should have. It is a pretty little town well worth exploring. However there were more mountains for me ahead on the way to Fez and I was anxious to keep going. The roads remained steep and my daily progress anywhere between 60 and 80 km. The fields around me were barren and brown awaiting the winter. Only the olive harvest looked to be in full steam and sometimes when I was overtaken by a large truck loaded with tons of olives I wondered what mankind would do with such masses. 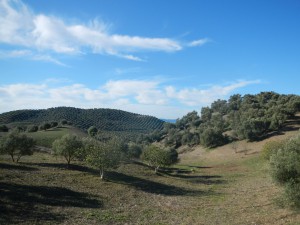 It took me three days to Fez. The first day was further along the main road, however the traffic became lighter. Then I turned on to a secondary road which for the most part saw very little traffic. Given the recent elections I ran into campaigners now and then. Some of them had great fun putting their fliers up on my bike, before, of course removing those of their competitors. I found it funny as well, however I made sure those fliers were gone before I reached the next town. What did I know what a party was about? And then, imagine a Moroccan guy cycling Europe with a bike full of propaganda of, say, one of the xenophobic parties and having no clue about it… 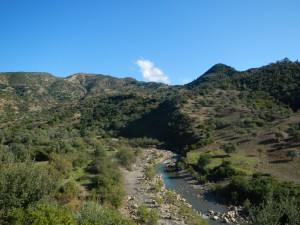 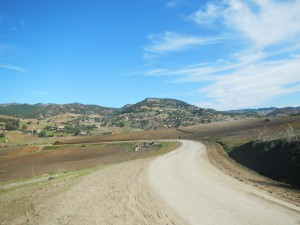 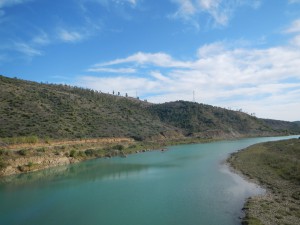 On the way to Ouazzane I encountered a teenage boy on a road bike. He followed me for some time, then, caught up and cycled next to me for some time, apparently not the least bit bothered by the motorists. Then he started to race me on the uphills, won each single time and waited for me on the downhills. Unfortunately our talking didn’t go anywhere since we could not even find a few words in a mutual language, but he smiled a lot and waved me off when after about 30 km our ways parted at an intersection outside of town.

At an unsigned intersection a man directed me onto a gravel road claiming this was a shortcut. It quickly became very bad and after about a kilometre I stopped to ask about this road once more since it was way too difficult to cycle and I wasn’t sure whether I would prefer to turn around and go the long way. A campaigner for the election who spoke quite good English assured me that the road would improve after another kilometre, then took me to a nearby farm where I was fed with bread and olive oil, followed by the obligatory mint tea. During my meal in the sun I watched the oil pressed out of the olives by a large donkey driven press. 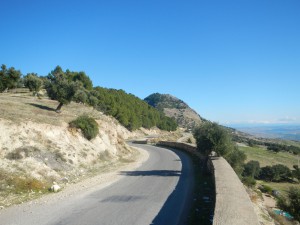 My first expected night of wild camping did not turn out. About an hour before sunset I started looking out for a good spot but there was none. Maybe a seasoned camper would have seen one, but for me the whole area looked very visible from the road and it was nothing but muddy fields. I asked a farmer whether he would let me pitch up the tent on his land behind a house, which looked dry and invisible enough. I wasn’t sure whether he declined or just didn’t understand what I wanted but I moved on anyway. As it got darker I saw what looked like a fairly big town in the distance so I hoped I would find accommodation there. As it turned out there was none. A young man invited me to stay at his house however I would have to share with two little kids, which I declined, rather for the kids than for me. He took me to the gendarmerie. They let me pitch up the tent next to a rather busy road just behind the house in view of the guard. One of the gendarms later brought me a desperately needed blanket and some food. One of the neighbours dogs wasn’t happy with my presence though and albeit it stayed on the property there was barking until late in the night.

A rough night is good for an early start. I rolled into Fes already in the afternoon after another day of challenging uphills and exhilarating downhill stretches. I left my bike with a guy running a secure parking and headed for Rabat the next morning.

This was when I started to screw things up a bit. I wanted to be at the Mauritanian embassy first thing on Monday morning so I planned to spend the night before in the capital. Only when I got on the train it appeared to me that I had thought it was Sunday when it was only Saturday. Dammit. I regarded this side tripe as a necessity rather than pleasure so I was not particularly keen on staying for longer than necessary.

However, as so often, you get a lot more than you expect and I liked Rabat instantly. After my arrival I bought a takeaway sandwich and some biscuits for an early dinner and was searching for a nice place to sit down and eat when I found a promenade along the river. It had a nice view onto the Kasba and was busy with the likes of courting couples, dads flying kites with their kids, and teenagers performing stunts on rollerskates. There was certainly a bit of this Sunday afternoon in Hyde park vibe to it. And given it is right on the coast the warm evening was certainly a bonus. 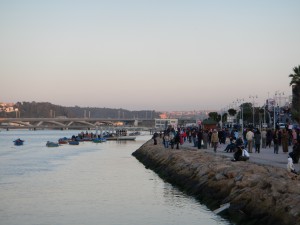 Sightseeing on Sunday didn’t disappoint either. I guess, for a big city in Morocco, Casablanca is the one to head for, but I found it not only beautiful. It certainly has that big city feeling about it as well, when you can just blend in as you are without causing any attention. 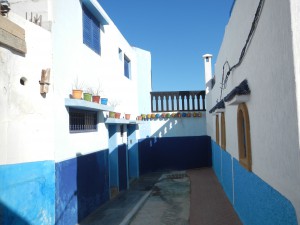 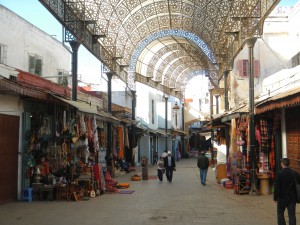 I was at the Mauritanian Embassy at 9.00 hours sharp only to learn that it was closed for Fete Nationale. So I moved on to the Austrian embassy where I filled out the registration form. Then I spent most of the afternoon in the cafes. I like the cafes in Morocco. All of them have a terrace and I can sit there for hours sipping coffee or mint tea and watch the world go by. And quite a few have WiFi as well. Wherever I went for a second or third time I was known by the waiters and what appeared to be regular guests. Tuesday morning I arrived at the embassy a bit earlier and secured a good place in the queue, which in no time expanded to about 100 people or more, most of them Europeans. At least, I wouldn’t be the only overlander I thought. The visa department was really a hole in the wall place where you first pick up the form, fill it out while standing in the queue, then be questioned through the glass front by the only official. Finally you are given a number to present when picking it up the next afternoon. Easy. There was enough time left for another trip to my embassy to drop the copies of all my documents. Further more I had a meeting with the consul and the police attache to talk about concerns on the road ahead.

I came back to Fes on Thursday afternoon. Friday morning I had a few things to sort out still, and spent the large rest of the day sightseeing. Fes is one of the imperial cities. The royal palace was probably the most impressive sight for me, I was certainly taken by all the gold and the mosaics. The Medina is large and full of beautiful old buildings. Many of them however are in bad repair. Like in other places there is a lot of effort to rebuild this part of town, and construction work all over the place. Perhaps in a few years this place will be all shiny and refurbished. I learned it is the crafts city where many of the things sold in the souks of Marrakech are produced. Particularly the tannery is popular with tourists. Here one can watch the whole process from the hides to the handbags, which from the looks of it hasn’t changed a lot since medieval times. I certainly have not seen everything I should have but after almost a week without cycling I was anxious to get back in the saddle. 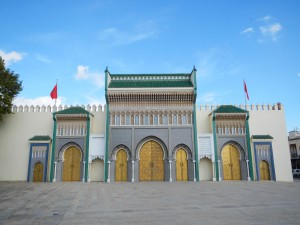 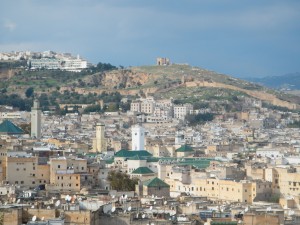 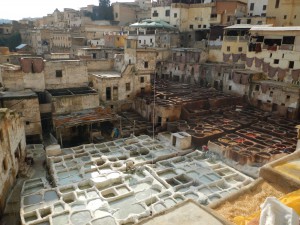 I am typing this already in the Atlas, in a funny town named Ifrane, with cramps in my legs and shivering when I even think about outside. There will be more about this in the next post.