My surroundings changed after leaving Marrakech. I didn’t notice it instantly. A cyclist has to be very alert when negotiating the traffic out of a big city, what leaves little attention for the surroundings. Then, there are are vast palm and olive groves around the city, completely artificial, due to a centuries old underground irrigation system.

I cycled further westwards along a secondary road. To my left, in the distance was the mighty snow capped High Atlas what made for excellent views. Between it and the flat road I was following there was a lot of nothing. The landscape had definitely turned more arid, and mostly it was open, rocky space. Now and then there were shepherds with their sheep and goats, but few other people. What food in particular the animals found there I don’t know, but these guys I guess aren’t beginners. Some patches looked like a plough had gone through. With all the rocks in the soil this looked a bit like a mystery to me, they must have strong donkey around here. 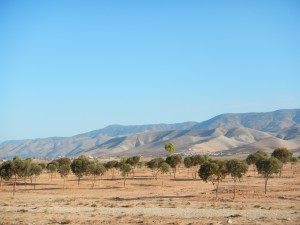 The further I went the more obvious change became to me. It was not only the landscape that had changed. There was change in people. Their skin was darker, and they were more colourfully dressed, especially the women. All heads were covered, either with a straw hat or turban. There was a change in architecture. Farm houses in perfectly geometrical shape, mostly painted pink, and later entire towns of these pink cubic houses. This looked no longer like Arabia, this was Berber as I learned. 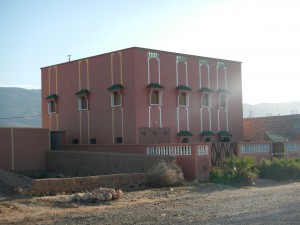 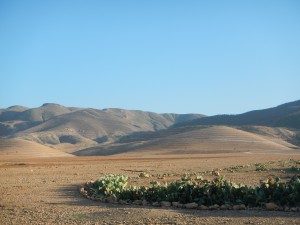 The further west I got the lower the mountains to my left, and by about midday there weren’t a lot of snowy caps any more. I had planned three days from Marrakesh over the high Atlas.

I contemplated my route across the High Atlas over breakfast in Imi n’Tanoute. Well, to be fair, the route I had chosen could probably be named the High Atlas for wimps, compared to the mighty passes further east, but it was nevertheless 140 km long, lead over two passes and from what I could tell had an accumulated climb of well over 2000 m vertical. I headed off across a predictably steep road however with marvellous surroundings. First most mountains were red on the bottom and yellow on top, what was soon replaced by an all red landscape. I stopped for photos frequently but thought it would be hard to catch this experience with a camera. 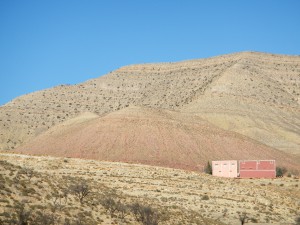 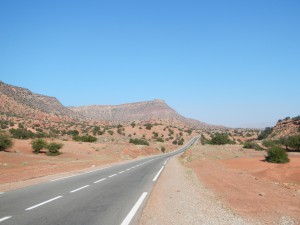 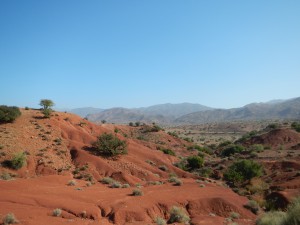 What surprised me was how well the cycling went. One thing I have learned in the past 3500 km is that the surface of the road has a major impact on the forthcoming. The tarmac on this road was especially good. Traffic was very light. On the way up I had just a short break for my second breakfast but otherwise kept going, slowly but steadily. I made good progress on the first downhill stretch. I kept going and going through this amazing red rocky world. There was of course the second uphill. Another road that crossed several times was painfully wrong on my map, so for much of the way it was difficult to locate myself. Hence, I had little idea when the second uphill stretch would begin. Well, I was apparently in the middle of it, when my sugar levels called the shots and I stopped for food.

The shopkeeper told me it would be only 2 km more uphill, and well, it was steep but the truth is one can always cycle another 2 km. It was 3 km, half an hour, but what did this matter? Once I was on top, I had all the way down to the ocean ahead of me. And it was a memorable downhill stretch. As a matter of fact, it was an hour of freewheeling, and another hour of virtual free-wheeling. It was probably the large distance I made in these two hours that convinced me I might make it all the way to Agadir. The sun was low but I went for it. I arrived just after dark, hungry and exhausted but no less happy. After all the most significant mountain range of my trip was behind me. I will most probably miss the scenery, at times, but then, in a way, it was a milestone too.

In terms of the effective climate classification by Kppen and Geiger by having crossed the High Atlas I left what is referred to as the ‘temperate and mesothermal’ or ‘C’ climates and entered the ‘arid and semiarid’ or ‘B’ climates. And while the Christmas storms sweep across Europe I resorted to protecting myself from the elements as well in the form of a hat and sunscreen. My steadily increasing water intake on the road has resulted in an ever growing collection of plastic bottles.

The big seller in Agadir is its long, crescent shaped, fine sandy beach which is sheltered even when the large Atlantic waves crash to the land elsewhere. In what seemed to be a complete absence of western package tourists it was certainly easy to make an excellent deal on accommodation, but life still proved a bit expensive here. After I arrived I thought about cooking my pasta on the balcony, but convenience won and I went to a restaurant. To give anyone who doesn’t know Morocco well an idea. For a two course meal and a tea at a restaurant on the roadside, or in a country town I expect to pay anything between 30 and 50 Dirhams. Prices here are times three. I certainly felt a bit ripped off. Food shopping for two days, what typically contains of two or three flat breads, a bag of pasta, tomato puree three cans of tuna, some tangerines, yoghurt and biscuits rarely sets me back more than 20 Dirhams. I was up to 170 in a shop here, albeit this included the rare treat of two beers. At the time of writing 1 Euro equals about 11.30 Dirhams. 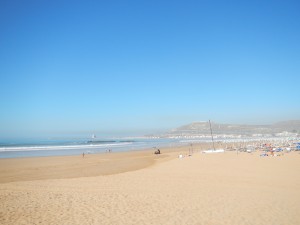 It was not necessarily by choice that I went to Agadir. I had to get some important documents couriered, and therefore I needed a big city. Two days in the enclave of western tourists, however also bore some advantages. Besides French I could also speak German and English, or a combination of either two, the main course was served after the starter and beer was available in any shop and carrying it out didn’t earn me any strange looks. And the beach is certainly nice.

I left Agadir on the N1, the road on which I will spend most of my remaining time in Morocco. It lead through an uninspiring though surprisingly green area first. Later on there wasn’t much apart from gravel, rocks and scrubs any more. Traffic was heavy and the cycling anything but nice. For the time being there wasn’t a lot of future for me on this road and I turned onto a secondary one towards the coast. Once more there were mountains, and I crossed what I think is technically the Anti Atlas, but compared to the mountains behind me this was rather a non event. The stretch along the coast was extremely beautiful. 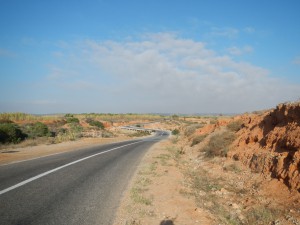 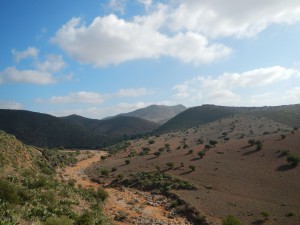 There was no need for a break really, but you rarely find yourself at a place as pleasant as Sidi Ifni, so I stayed for two nights. It is an eerily empty outpost of Spanish colonial architecture with a nice beach between the rocks with a constant noise of the mighty Atlantic waves crashing. Certainly consider coming here, if you head for Morocco!! 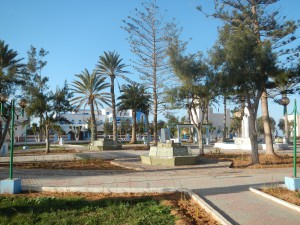 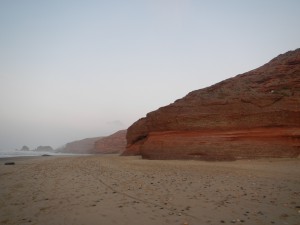 The route from now on is very predictable. I will enter the Sahara proper in the very near furture and then there is only one road ahead (as said earlier, the N1). If my my bike and I stay healthy and strong and if the trade winds are kind it should take me less than a week for the next 1200 km to the border. 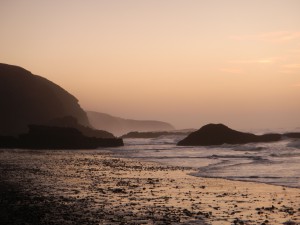