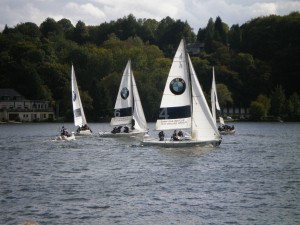 I had a very late lunch at the Innenhafen, a remodelled port on the Rhine and one of the more successful urban regeneration projects and a good night sleep in Duisburg. With the exhaustion of the past few days I was not up to much. I was expected for dinner with friends in Bochum so I had the whole day for this stretch of about 30 km. It would be a gentle ride, through known territory. 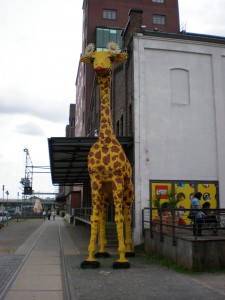 The Ruhrgebiet is Germany’s largest and Europe’s fourth largest (after Moscow, Greater London and Ile-de-France) urban agglomeration. There is no one centre as such, it consists of a number of big and moderately big cities bordering each other. I used to call the area home for three and a half years, Essen to be precise. Before the industrial revolution the area wasn’t much except for a few towns and farms. When mankind learned what to do with coal, this changed rapidly. Coal of very high quality is only just below the surface here. In some areas, you virtually dig a hole in your garden and grab it. Very quickly the area developed into a buzzing industrial centre, and with large numbers of immigrants flocking in big cities developed within just one generation. Canals were dug and railway lines built in support of the heavy industry and the coal mining. By the early twentieth century around 300 coal mines were active in the area. During the two world wars the Ruhrgebiet functioned as Germany’s central weapon factory. Consequently during the Second World War the area was levelled, wiping out about 20 % of Germany’s entire industry. The cities were rebuilt in a rush, apparently without anyone bothered to involve the architects. The ‘economic miracle’ of the 1950s and 1960s saw the area as a main beneficiary as it created a high demand of coal and steel. From the early 1970s onwards coal mining became less competitive and the area went through a number of structural crises, known as steel crises. The Ruhrgebiet today is still an extremely large albeit shrinking metropolitan area. There is little beauty to it on face value, but it is a unique place in many ways. Certainly industrial but surprisingly green, crowded but long past its persistent cliche of heavy pollution. Looking at its history and perspective it seems there has always been a future, even if the present has never been that great. Due to its large population and the density of industrial headquarters it remains a political and economic powerhouse. Football is a serious matter here. I has developed into a top notch cultural centre. People are open, almost cheeky, with a strong egalitarian perspective. Albeit grey, the place is far from grim in my memory.

I headed for Essen in the morning. Ignorant of where I was going, other than the general direction I turned onto Karl-Lehr-Strae. Here, on 24th July 2010 a stampede at the Love Parade, an electronic music and dance festival caused the death of 21 people and hundreds of injuries. A place between two viaducts is heavily decorated. Besides of mourning a high degree of anger is expressed here, anger at the authorities and organisers. I stopped for some time. 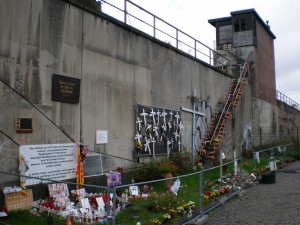 The centre of Essen is usually very quiet on Sundays. I stopped for a coffee and surfed the internet for a bit, I was still ready for some rest. The remainder of the way to Bochum took me on a nice path along the Ruhr river, through woods and fields. 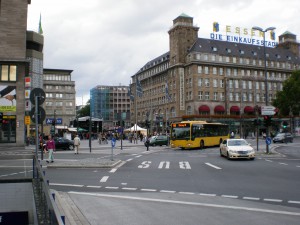 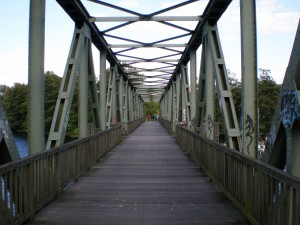 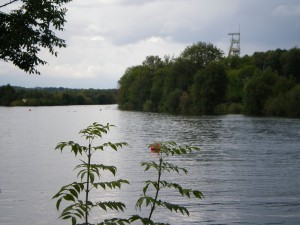 When I started cycling around London sticking to the left side of the road was of course something I had to get used to. After three years, other than expected, I didn’t have to get used to go back to the right side. Rather I feel comfortable on the side of the road, regardless whether this is the left or the right one. This is rarely a problem, except when I am forced onto the other side by something other than traffic. If unaware, I caught myself just continuing on that side, until, well, usually other people make me aware of where I am cycling.

Seeing friends is always nice and there is a bunch of especially close ones in the area. And not least a few comfortable and free nights. I had arranged for some drinks at my favourite bar at the time when I lived there on Tuesday. Many friends and former work colleagues showed up and gave me a nice wave off. I had a great night.

The knock on effects of the night before caused a late departure, as I left on Wednesday, headed back to the Rhine. 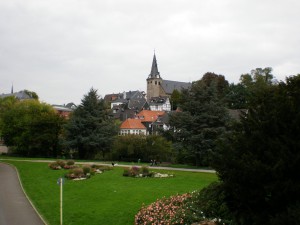