bringen die Donau zuweg. All right, this is German, and since you are reading the English blog, I will give some explanation. It translates roughly into Brigach and Breg create the Danube. It is one of these little rhymes they teach the younger kids at school in order to make them more easily remember a certain fact. They teach you this one in Austria anyway, and if you were educated anywhere else in Central or Southeast Europe maybe you heard a similar one in your language. Two little streams, running eastwards out of the Black Forest, namely the Brigach and the Breg converge into one river, and this point is considered the source of the Danube. At 2810 km this is Europe’s second longest river after the Volga. Along its journey to the Black Sea the river changes names 6 times (Donau, Dunaj, Duna, Dunav, Donava, Dunarea, and Danube), crossing (or marking) 9 borders and flows through 4 capital cities. 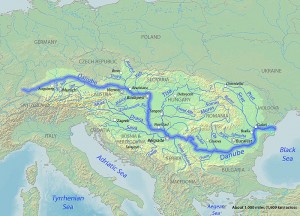 The closest human settlement to the spot where Brigach and Breg converge is called Donaueschingen. From there the mighty river starts its journey eastwards, on a map at least. In the real world this is only half the truth. About 30 km downstream as it enters the Jura a curious thing happens. With a gurgling sound the water disappears into the ground. In fact the bottom of the river bed itself falls entirely dry for about half of each year. The water runs under ground through a system of caves in the limestone and eventually surfaces again around 20 km to the south, this time being called the Radolfszeller Aach, a stream which drains into Lake Constance, hence the Rhine. Long, long time ago the Danube drained an area as far west as today’s Rhone. However, over time the Rhone and Rhine both having steeper gradients and more erosive power sliced up the upper Danube catchment piece by piece, redirecting the water into their catchments, and will continue to do so. Since the previous Ice Age an ever increasing amount of water out of the Black Forest is redirected into the catchment of the Rhine underneath the surface. There the water washes out some 70 000 tons of limestone each year making the holes on the bottom of the river bed bigger and bigger. Eventually the surface will collapse and the entire Black Forrest will be within the catchment area of the Rhine. And Brigach and Breg will no longer be the source of the Danube. This said the Danube expands at its other end, the Black Sea. At its ever expanding delta it deposes the sediments which its tributaries erode primarily out of the growing Alps. Consequently the whole river doesn’t become shorter, it actually relocates eastwards.

So far the first mountain range of significance that I encountered, the Black Forest, still separated me from the Danube. Freiburg was another nice and atmospheric place for a stopover. The goal for the day was Donaueschingen, only 70 km away, had my planned route worked out. 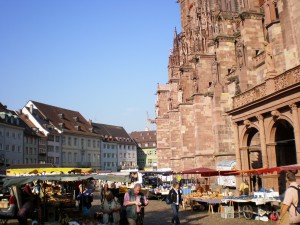 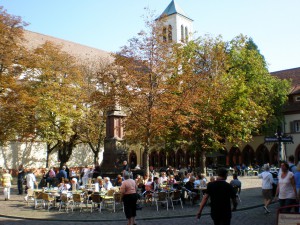 It turned out a bit longer due to a road closure and consequently a detour. Nevertheless it was a beautiful ride through fields, forests, and pretty towns. And it was steep, mind you. This certainly is a proper mountain range, not the way the Alps are, but still. Enough for a rookie. I shouted a few swearwords at the road during the steepest parts but I managed to get across pedalling without significant damage or delay. The views as well as the downhill stretch that followed more than compensated for the pain uphill. 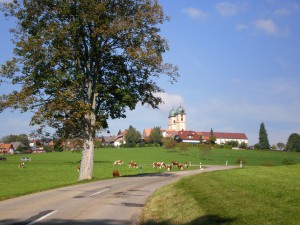 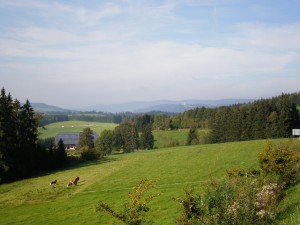 Donaueschingen I found a bit of a nondescript town, nice enough, but certainly no comparison to all these old towns full of atmosphere I saw on either side of the the Rhine. The next morning I went down to the convergence of the Danube which is a surprisingly unremarkable spot. The only slightly monumental feature there is a set of flags for all the countries the mighty river runs through. The flag for Austria was missing though, much to my disappointment. A woman who had previously travelled to Ukraine showed me photos of the other end of the Danube. I think it could be great fun cycling down the river. 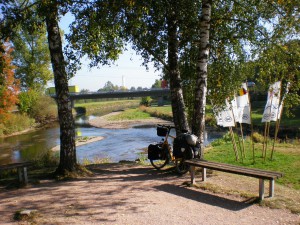 Exhaustion hit once more and my plan was to gently cycle just another 30 km down the Danube to a town named Tuttlingen and catch a train from there. Given the previous weeks lack of rain several stretches of the Danube were dry, elsewhere it rarely looked like more than a dirty and slow moving stretch of mud. 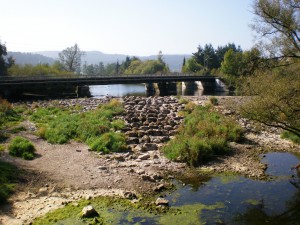 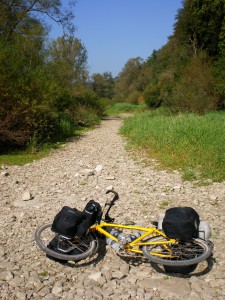 Some locals convinced me that the most beautiful stretch was only after Tuttlingen, and then, I could catch a train from Beuron as well. They were absolutely right, and into the Jura with its white rocks and the beginning autumn colours the landscape was truly amazing. Less enjoyable was dealing with my exhausted self. Even the tiniest uphill stretch felt like the 38th kilometer in the marathon, and I was torn apart. Half of me was admiring the surroundings and the other half of me was swearing at those idiots who had told me to go further and to that idiot who had listened to them and kept going. 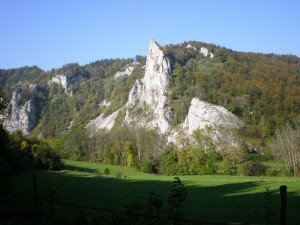 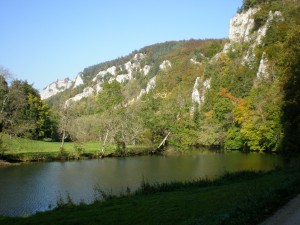 In Beuron I bought a ticket to Garmisch-Partenkirchen, sort of a shortcut to the Alps. I arrived there around ten in the evening after changing trains three times, including in Munich in the midst of the Oktoberfest craze. I still didn’t feel like cycling the day after and took a train to Brixlegg. On a day trip to Innsbruck I had learned that my professor from uni was about to retire and for this reason there was some sort of academic celebration planned for Thursday. And I was correctly assuming a few beers afterwards with lots of old colleagues. I stayed five days rather than the three planned and attended. It was great fun. 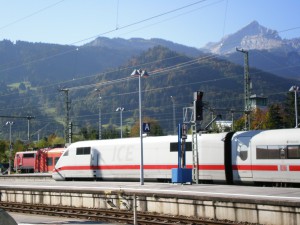 Friday brought snowfall down to 800 m. Without any proper cold weather clothes in my pannier bags I continued on the train to Salzburg where I still am typing these lines. Now only some really funky tan lines remind me of three weeks cycling across Europe in the bright sunshine, I have been very lucky so far. Now there is another sunny, albeit chilly, day on the road ahead. I plan to cross the Alps next.