Piacenza saw me for two more nights and it proved to be a friendly place. Probably most places are if given a little time. It is a nice city yet not touristy at all. It was fun hanging around for a bit in town and of course the nicer hotel I had chosen after the first night improved the situation. 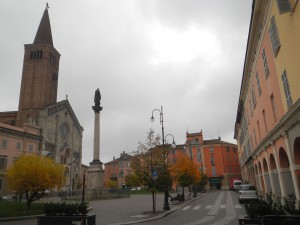 I left Tuesday morning still in dreadful weather. It would be another uphill day. The road remained flat until Rivergaro, from where the Valley of the Trebbia starts leading uphill. Even in the thick clouds and showery weather it was quite obvious that this was an extremely beautiful area if there was only more to see. 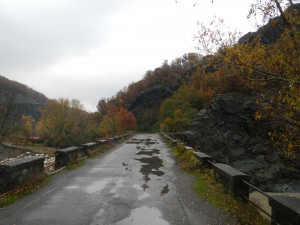 It didn’t really matter how far I would go that day. As long as I did a mere 30 km it would be just one more day cycling to Genoa in any way. I knew the weather would improve in the near future so I stopped in Bobbio for the night. It is a pretty town in some of the most beautiful surroundings. Further more after the rain and the dirt of the previous days, as well as a slowly evolving puncture my bike needed a little attention. 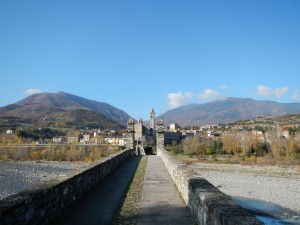 The sun showed itself briefly on Wednesday afternoon and on Thursday I left under perfectly blue skies. Once more I had taken my plans back a bit. There were a few things I wanted to sort out in Genoa before I would leave Europe. Sundays are strictly observed in Italy so little could be done then. I pre booked my accommodation in Genoa for Friday and would stop for the night somewhere on the way. So far the plan…

For the last time in my winter clothes I cycled further up the Trebbia valley. It was a long climb until well after lunchtime. The gradient however is very nice and I kept happily pedalling for hours without the need for a break albeit not very fast. And it was really, really beautiful. It had certainly be worth the slow progress of the previous days just for the views on one of the most scenic stretch of my route. 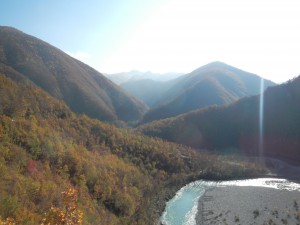 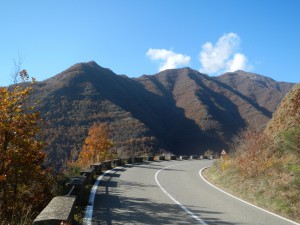 Another delight of cycling in Italy, or probably travelling there in general are the coffee breaks. There is at least one bar in each town however small it will be. A coffee is always 1 Euro and with an industrially packaged brioche the bill usually adds up to 1.60 Euro, or 1.80 Euro with the freshly baked variety. There really is no point setting up the camping stove.

The downhill stretch was predictably very enjoyable. Much like on the uphill stretch it followed a very nice gradient, meaning that I effortlessly rolled along at something between 30 and 40 km/hr.

After I had turned the map for the last time the section I was looking at showed that big blue area with the words ‘Mar Ligure’ written across on its bottom end. It had been some time ago that I had seen that same big blue area on the map, and back then it had been on the top edge and was labelled ‘Noordzee’. It struck me like a flash. I was not far away from the other end of Europe! Sometimes I just don’t make these obvious connections any earlier. So now ambition took over. The daylight would not last much longer but nothing mattered now and all my thinking narrowed to one thought: I would see the Mediterranean Sea today.

The destination I had quickly chosen was Recco what seemed about the closest coastal town to where I was. The last intersection was at a town named Gattorna, where I should have turned right. The signposting there wasn’t entirely clear to me and, and I missed it. Perhaps… or not. I wasn’t sure. Well, at this stage I really didn’t have the time to contemplate whether a turn I made was right or wrong, mind you, and stopping to ask or consult the map was unthinkable. I assumed I was headed for Chiavari now, which being a coastal town as well was just as good. By now, nothing mattered, as long as the road was downhill, I figured, it would take me to the seaside, and that was all I wanted.

I rolled into Chiavari well after dark. An easy distance planned had turned into 120 km. After finding a place to sleep I bought a pizza in a box and a few beers and headed for the beach where I listened to the waves breaking and bathed my toes in the water. 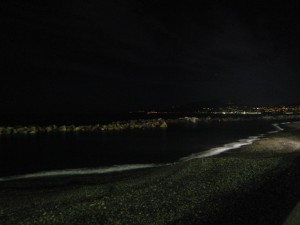 My rather errand cycling the day before had taken me quite a bit away from Genoa. However it would be a nice ride along the coast. The road out of Chiavari soon led uphill, at a hefty gradient. While all the towns are on the shore here the road is a bit inland, what means elevated by about 200 m in this rather steep area. When you leave a town the road quickly starts to meander and while spiralling upwards you don’t move an inch towards your destination. Then it is a relatively flat stretch to the next town, where you then spiral downwards in a similar fashion, then upwards again, and so on. The beauty of the surroundings however is a great distraction. After an absolutely scenic and a bit roller coaster like ride I arrived at Genoa at dusk. 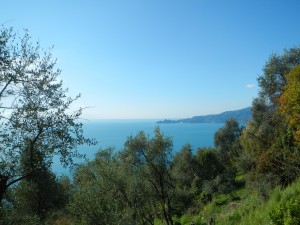 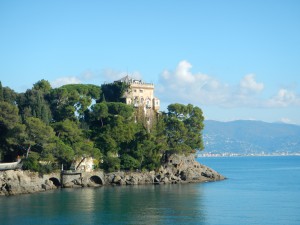 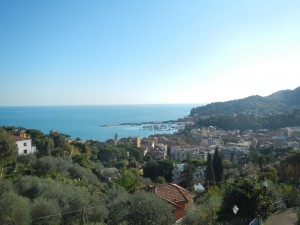 Genoa certainly doesn’t disappoint with beauty. It is quite a vertical city, with only a small flat area around the harbour. The centre is about three floors up from there. There are plenty of viaducts and intersections often mean two streets cross another on different levels. Public transportation has a horizontal component in the traditional form of trains and buses and a vertical component in the form of lifts and funiculars. It is mostly a collection of beautiful architecture, with even a handful of big squares, something I would not have expected in such a mountainous place. The old port is nicely remodelled. Streets are bustling with activity, most are less than 2 meters wide. 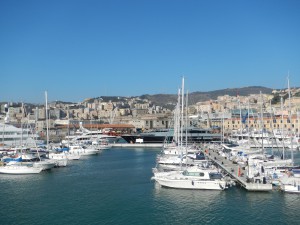 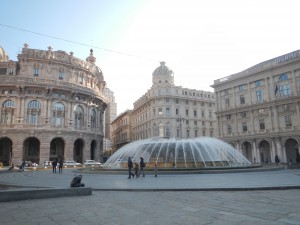 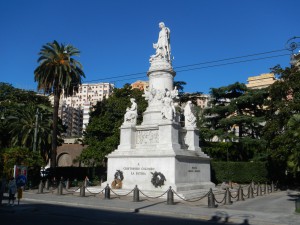 I wandered down to the ferry terminal first thing on Saturday. I bought a ticket for departure on Thursday then went off doing the funny things tourists do and just generally enjoyed the sun and warmth. My relaxed sightseeing tour continued on Sunday, and as business resumed on Monday I got down to some last minute preparations and shopping.

I have thoroughly enjoyed the time in Genoa. Now I am looking forward to crossing the Mediterranean Sea. The trip on the ship is something rather exotic for me. It will be good to get going again too. And finally I am soon going to arrive on the African continent. However there is also a part of me that is a bit anxious if not slightly fearful. That ship will take me out of my European comfort zone. There will be a lot more new things to discover, and a lot of new things to to deal with. Most probably the trip across Europe was only the appetiser.