My map said it was 52 km from Fes to Ifrane. A fairly straight line, about 5 cm long, so there would be not too much meandering, I figured, and the gradient consequently be manageable. The Atlas had to be somewhere else. A fairly short distance for the day however I was curious about this town. If I was early, I could still go further. I left around mid morning after a leisurely breakfast in the cafe. ‘Is this very steep?’ I asked another guest pointing at the chosen road on the map and he answered, ‘Hm, rather up and down’.

I stopped after 30 km in the middle of nowhere when I almost puked. I was dizzy. I decided this break would take as long as necessary and I would take it slowly thereafter. How I would do that wasn’t clear to me, since I was going at the lowest speed possible to maintain a straight line already. Now and then I had noticed my scenic surroundings but for most of the time I was just angry and exhausted. My legs burned. I continued uphill, reached a town. I quickly scanned what was on offer at the shop and opted for chocolate biscuits and a milky drink with strawberry taste assuming those would flood my system with sugar reasonably quickly. Then I continued, kilometre after kilometre at walking speed. Aren’t we fabulous beings? Turning chocolate biscuits into forward motion…

The road flattened out a bit, relatively speaking, for the last 10 km. The sun was low and it got chilly, then properly cold. Normally I would just push it a bit harder to keep warm, but I was beyond that, I was simply too weak to keep warm.

Ifrane is a funny town, but on arrival this mattered little. It was difficult to focus on anything other than warmth, food and rest. Fortunately, in my miserable, and short fused state I quickly found a hotel with a proper heating and an endless stream of hot water. After dinner, when my basic needs were met, I contemplated that passed day. This had been essentially 50 km straight uphill. My GPS receiver told me I was at about 1600 m above sea level, and the map indicated about 400 m for Fes. I had certainly never done a 1200 m difference in altitude climb on a bicycle before, let alone a loaded one.

So far on this trip I have been smart enough, or lucky enough (the two are not always easy to distinguish) to not run into trouble. However that day there was a lesson learned, and if you head off to cycle the Atlas in December, here is a piece of rock solid, road tested advise: Don’t send your gloves home from Genoa!

As I mentioned before, Ifrane is a funny town. It was purpose built by the French to resemble an alpine resort town. It is tidy, modern, and orderly with red roofed houses, flower beds, parks complete with an artificial lake all kept impeccably tidy. There is a skiing area nearby too. It really doesn’t look like north Africa at all, and to me felt a bit homely. 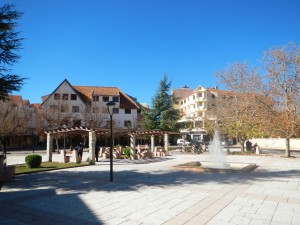 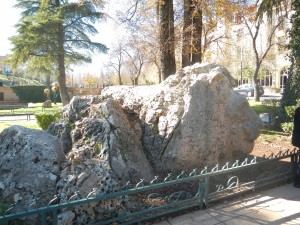 I left the next day for a short downhill ride through the cedar forrest to Azrou. The town has nice views but is otherwise unremarkable. Nevertheless I stayed for two nights, glued to the bowl. 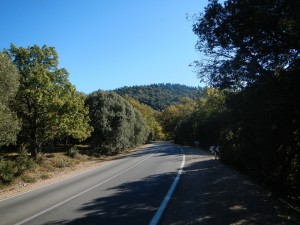 An absolutely beautiful stretch followed to Khenifra, still an up and down ride however noticeably more down than up. Albeit it was always well below freezing over night by day the weather was about perfect for cycling and now and then some lycra laden guys on road bikes whizzed by. I certainly wasn’t the only cyclist around. 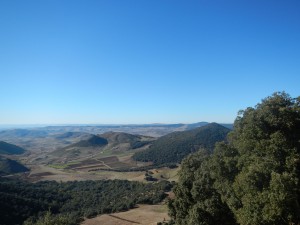 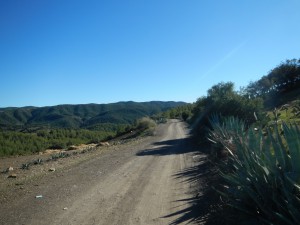 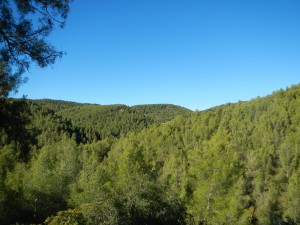 Not long after Khenifra the road flattened considerably and for the first time in a month I had made a daily progress of more than 120 km. Overall it had taken me six days for the stretch from Fes to Marrakesh. I could have had this faster however I stuck to a fairly luxury way of travel. Over night temperatures dropped to well below freezing, and there was always a layer of hoar frost in the mornings so I went from one town with accommodation to the next.

Looking is free, Make me happy and come into my shop for a minute… It doesn’t take long after entering the Medina in Marrakesh until shopkeepers or touts distract the attention of a blue eyed foreigner. I spent three days exploring the colourful souks and the cabinet of curiosity of characters trying to befriend the western traveller. I opted for a Riad, a town house to stay, what is a little expensive but a very nice experience. Town houses have a courtyard, and most or all of the windows, balconies and decoration is to the inside. This is where one can see all the tiled walls and mosaics, while from the streets and alleyways the residential areas in the Medinas are rather featureless. 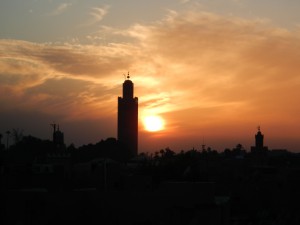 It is an interesting city however I have to admit the hassle isn’t my cup of tea and I am looking forward to jump back in the saddle and head for the coast. My original plan was to cross the High Atlas. However after the cold nights in the Mid Atlas I decided otherwise. It is all snowy and I am not equipped for this type of weather. Technically of course I have to cross it in one way or another however I will continue westwards first and cross over at a low elevation.