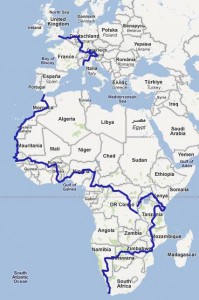 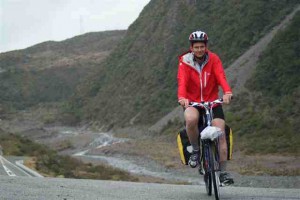 Click to enlarge I will update whenever I have a good internet connection. My plan is to cycle from London to Cape Town, I left London on September 11th 2011. To the left is the originally planned route.

To know something about Africa (wikipedia):
Africais the worlds second largest and second most populous continent, after Asia. At about 30.2 million km (11.7 million sqmi) including adjacent islands, it covers 6% of the Earths total surface area and 20.4% of the total land area. With 1.0 billion people (as of 2009, see table) in 61 territories, it accounts for about 14.72% of the worlds human population. The continent is surrounded by the Mediterranean Sea to the north, both the Suez Canal and the Red Sea along the Sinai Peninsula to the northeast, the Indian Ocean to the southeast, and the Atlantic Ocean to the west. The continent has 54 sovereign states, including Madagascar and various island groups. Africa, particularly central Eastern Africa, is widely regarded within the scientific community to be the origin of humans and the Hominidae clade (great apes), as evidenced by the discovery of the earliest hominids and their ancestors, as well as later ones that have been dated to around seven million years ago includingSahelanthropus tchadensis,Australopithecus africanus,A. afarensis,Homo erectus,H. habilisandH. ergaster with the earliestHomo sapiens(modern human) found in Ethiopia being dated to circa 200,000 years ago.Africa straddles the equator and encompasses numerous climate areas; it is the only continent to stretch from the northern temperate to southern temperate zones.The African expected economic growth rate is at about 5.0% for 2010 and 5.5% in 2011.