I was born and raised in Salzburg, a pretty town right on the northern edge of the Alps. After school and military service I headed for Innsbruck doing some social work whilst attending university. I left with a degree in Meteorology. For a year I sold my forecasting skills to the media industry and spent another one patrolling the border before I left my country. To pursue a career in the energy industry I settled in Essen, which I found not quite as pretty, but where I ran into some really amazing people. Three years later when a job in the financial industry appeared tempting I moved to London where I spent three years as a banker, club runner and proud Camden resident. I stumbled upon the websites and books of people who explore the world on their bicycles. In September 2011 my own bicycle tour began. I already visited Africa in 2010, as you see me on a Pic from Namibia. 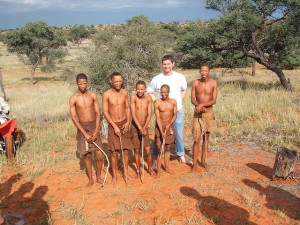